I've owned nearly every edition of Warhammer at some point or another.  But the original White Box 1st edition was the one that never synchronized with my finances, availability, and/or my interest in wargaming (dont you just hate those hobby droughts).  At long last, much like the Dark Crystal, the Great Conjunction is upon me.  Just today, I have received a beautiful copy.  The box is reasonably intact, and all the booklets are in very good condition.  Also, the box contains not only the 3 booklets it should have, but also 3 booklets from the Forces of Fantasy expansion, and another booklet of armies called the Book of Battalions.  Basically everything I could ever need for 1st edition gaming.  I might hunt for some old White Dwarf magazines in the future though.

So its official...  this blog is now an Oldhammer blog.  And I am aligning myself to the codes of conduct of an ancient and venerable institution.  The Invisible Fraternity, the Brotherhood of Worldwide Gaming Grognards.  Our manifesto: to grumble a lot, roll dice often and sneer at new fangled rules sets.  So, fellow soldiers of the Old Guard, I have come to say... after many years I am ready for a new campaign to extend, once again, the limits of glory!

Whats that mean for this blog?  I will be skewing my purchases towards old lead from the 80s.  Marauder, Citadel, Ral Partha, Grenadier, etc...  These will fill the ranks of lead I already have.  And of course my rules are here, a perfect fit as you will see for my Dwarven Lost Kingdom Reclamation Project.  Highlights as to why Im using 1st edition: Use any figures, rules for fighting in dungeons, dwarf and gnome army lists, scenario driven games, character hero progression for a hybrid blend of rpg/wargaming, and even stats for Balrog (yeah, not a bloodthirster... Balrog, deal with it, Tolkien estate!) Some pics to celebrate and some words to accompany them below. 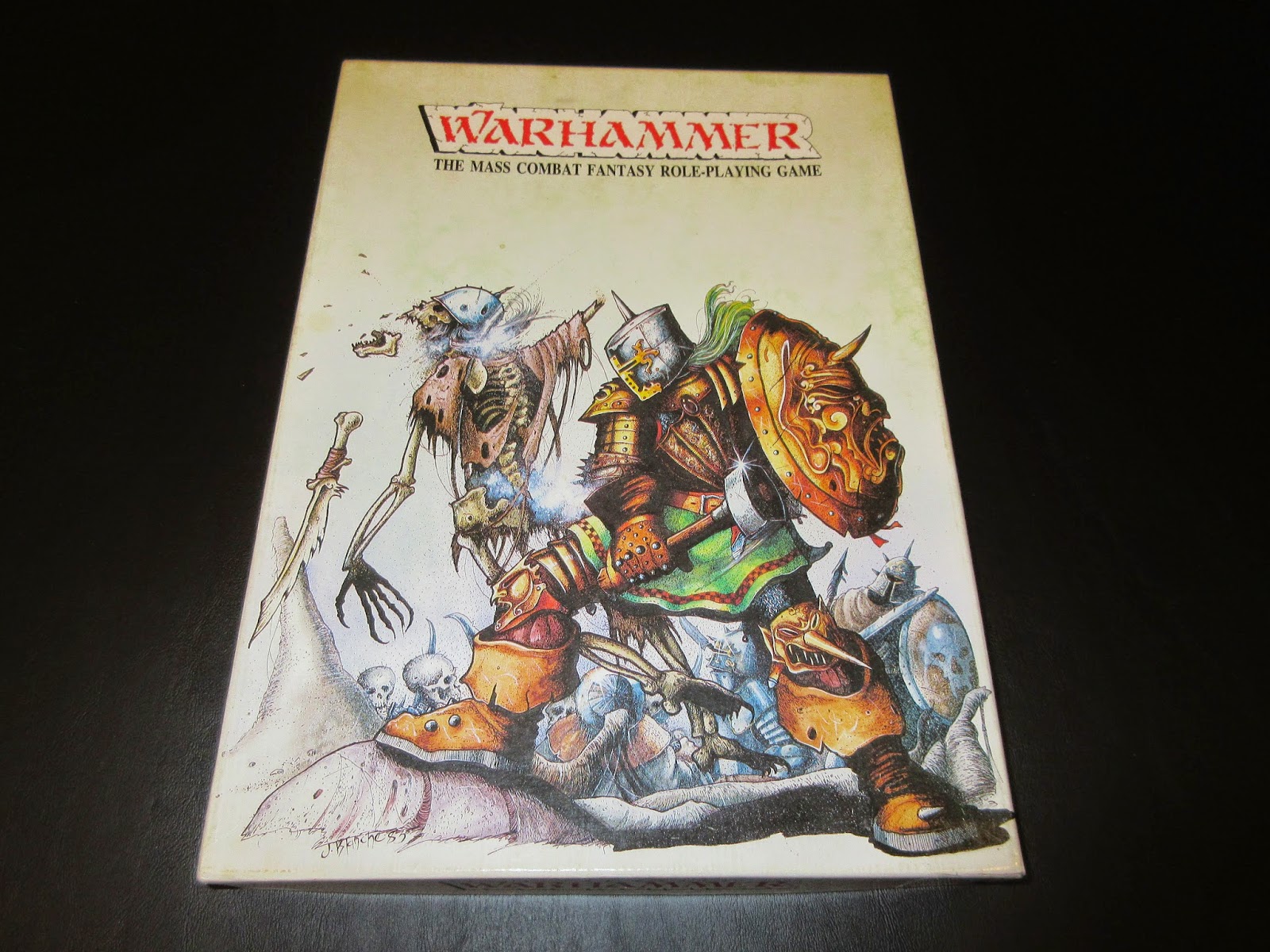 Beautiful old school charm, box is in great condition considering it was "made in 1982" 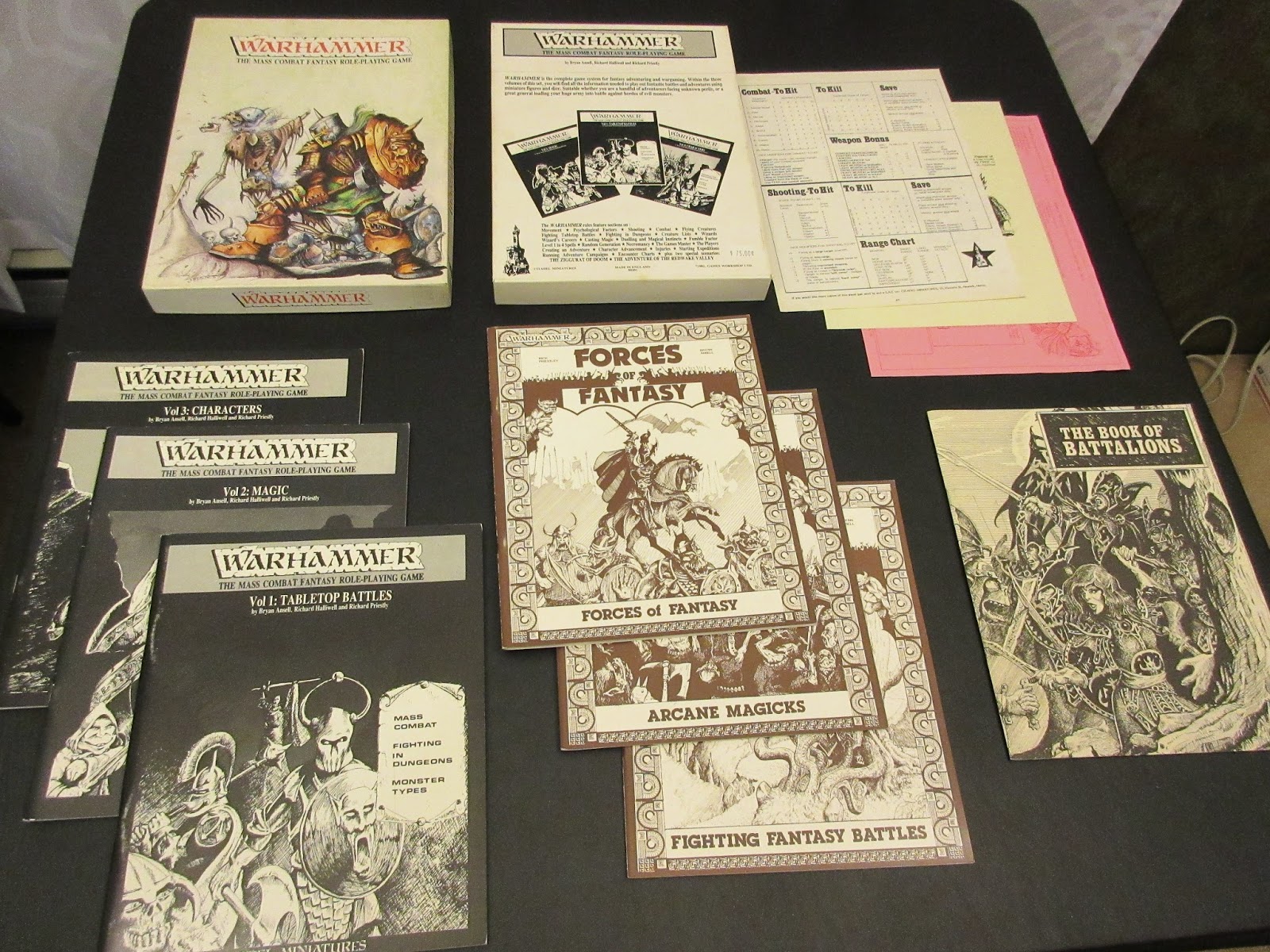 And look at all the goodies that were in it! 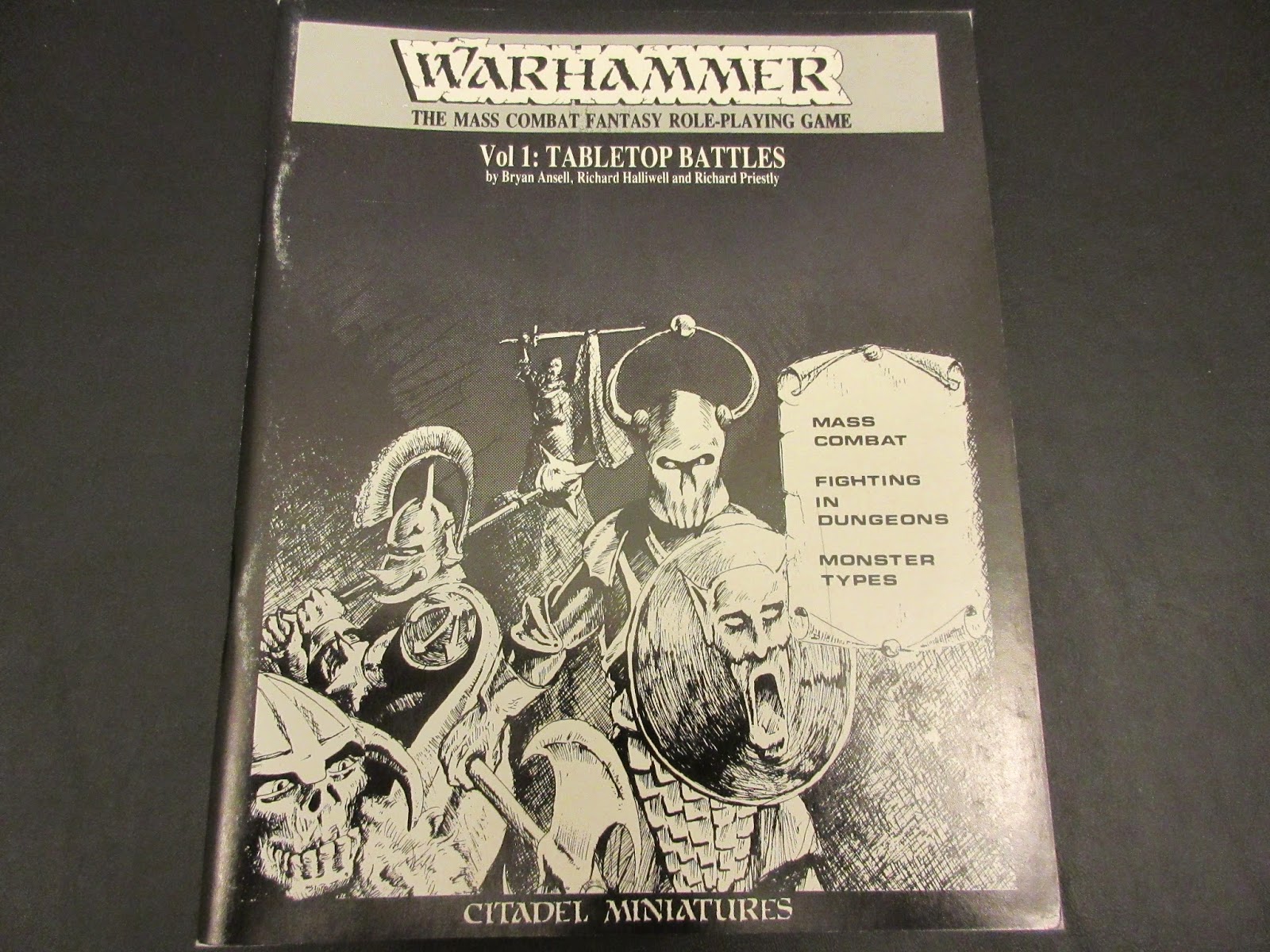 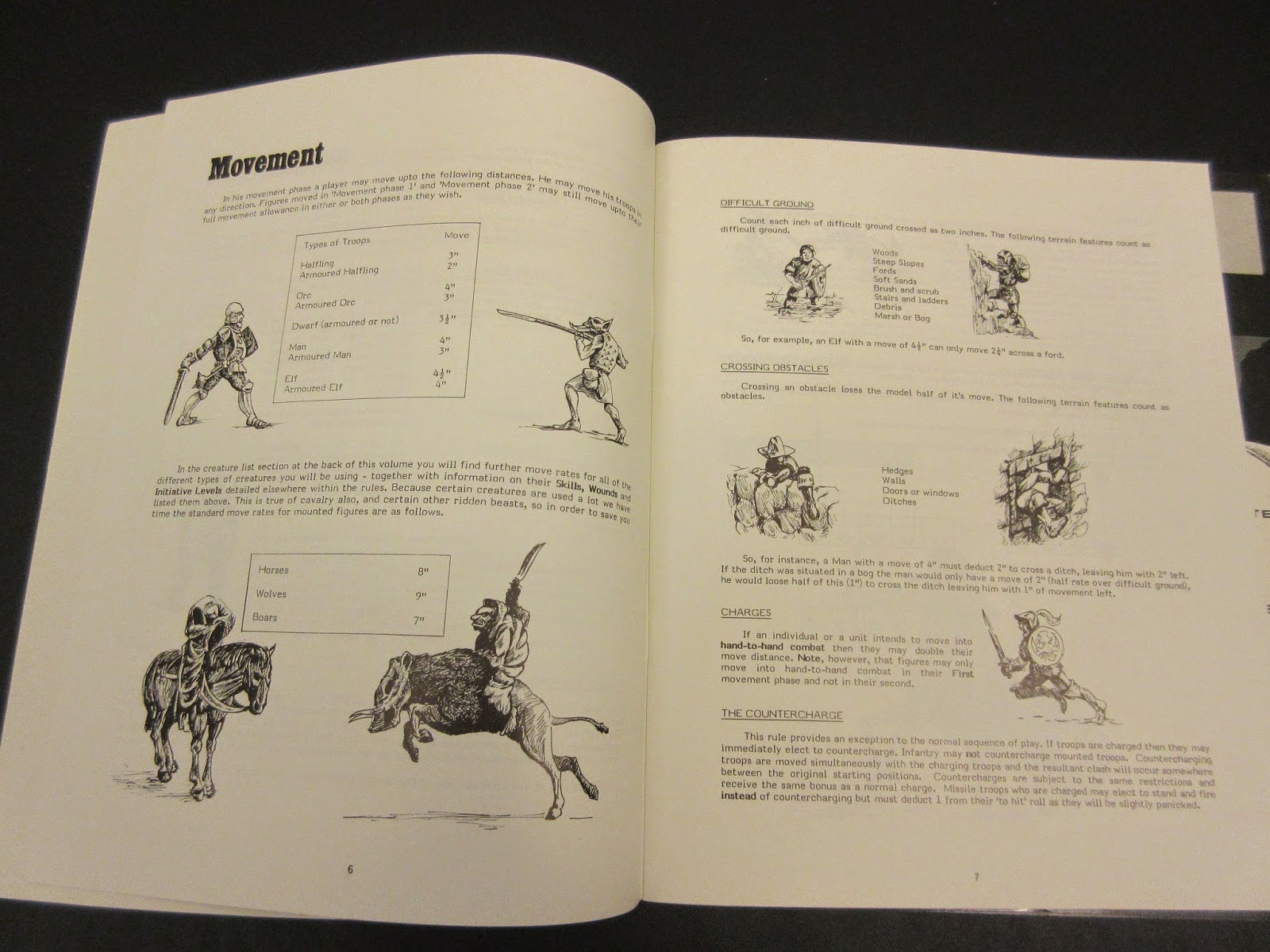 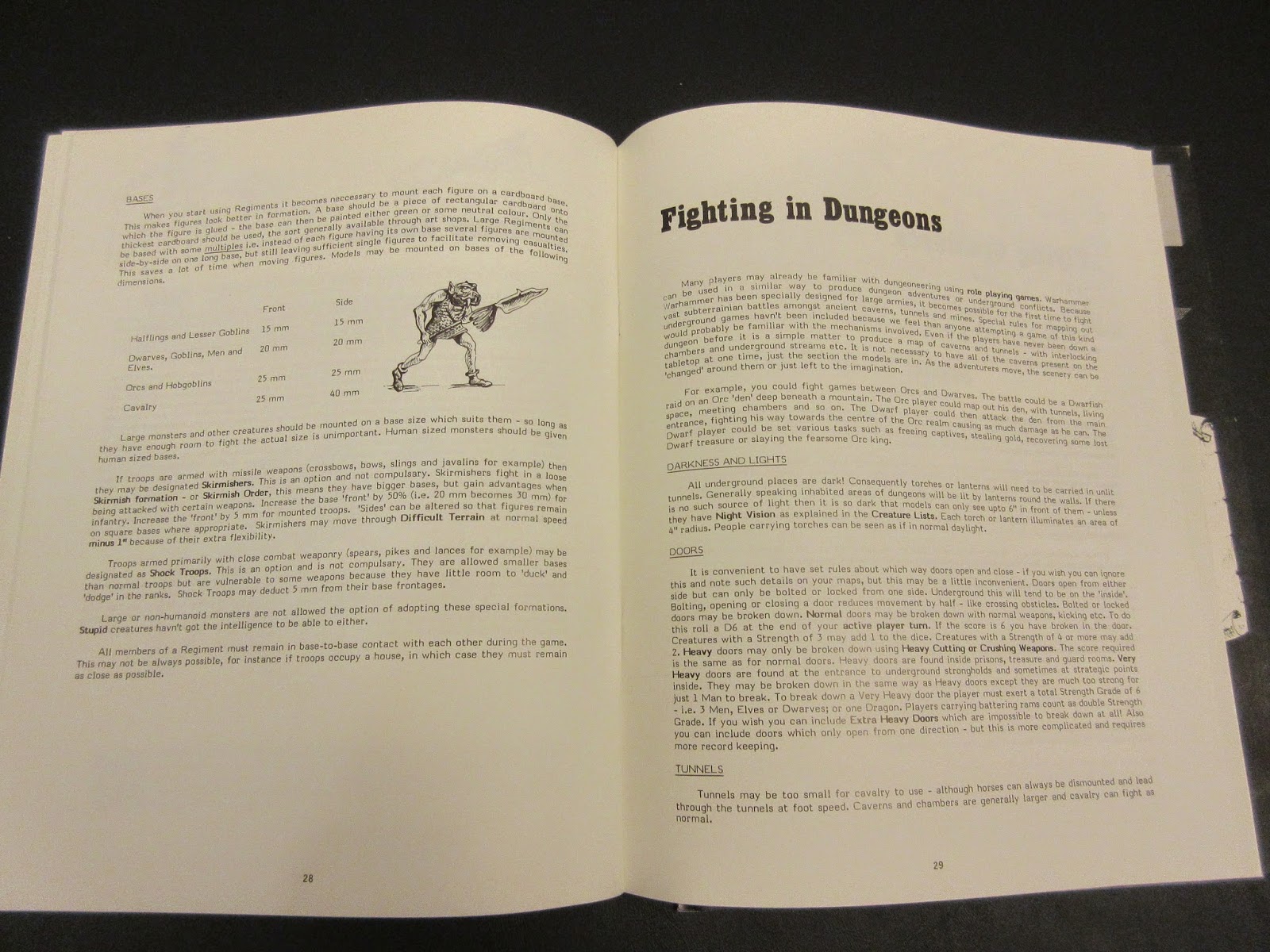 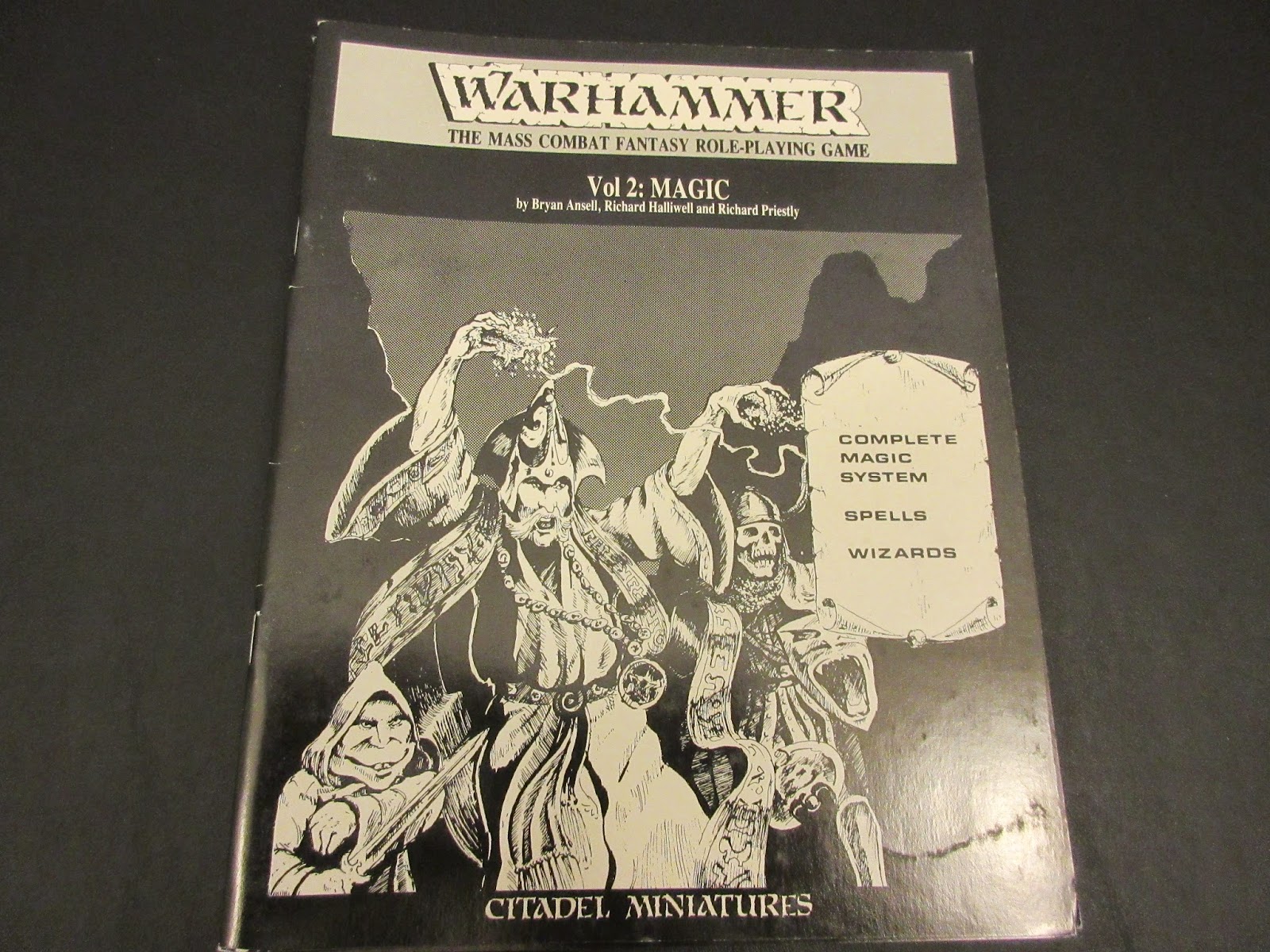 Booklet 2 is for magic 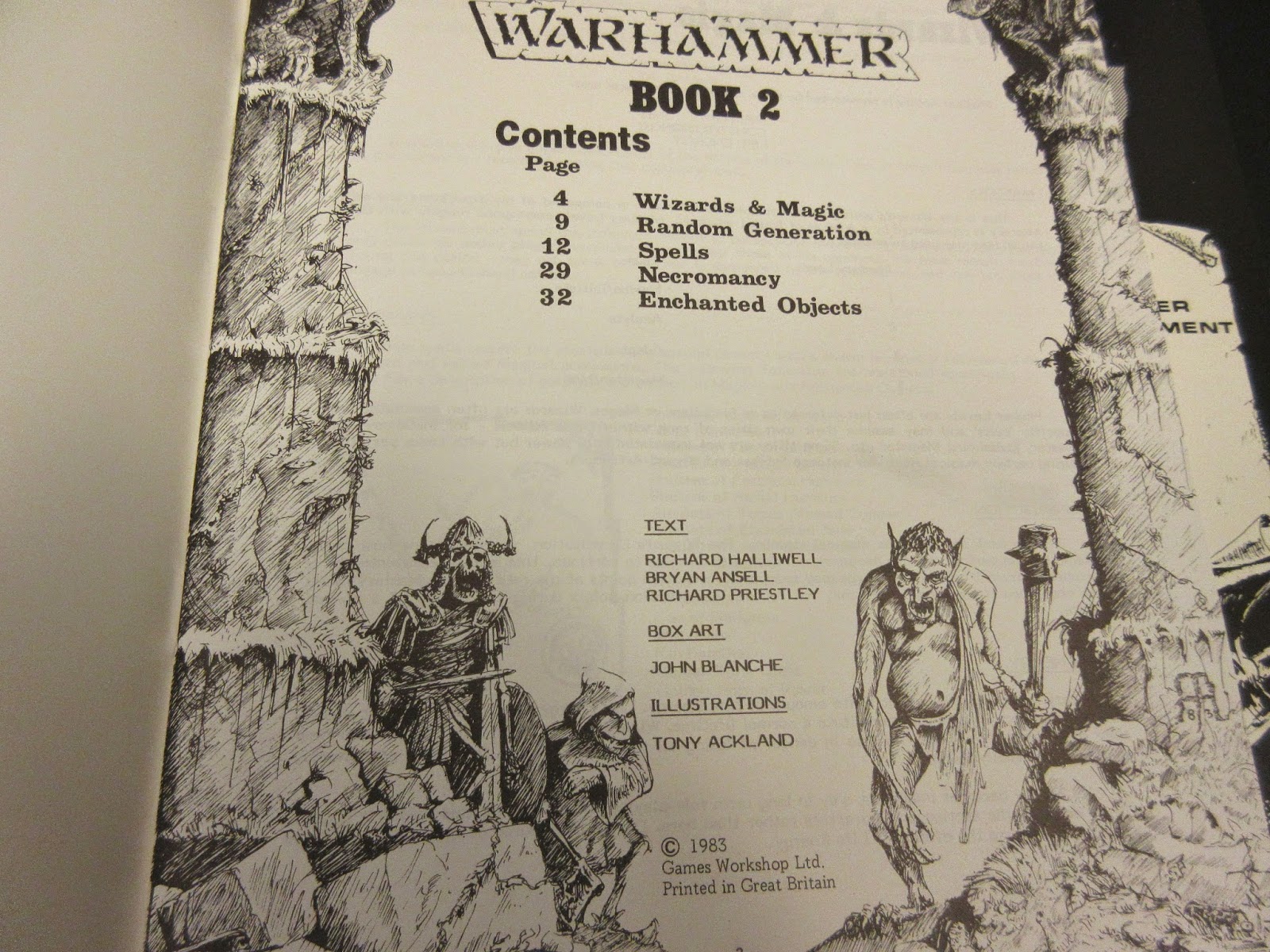 Look at that art!  Look at it! 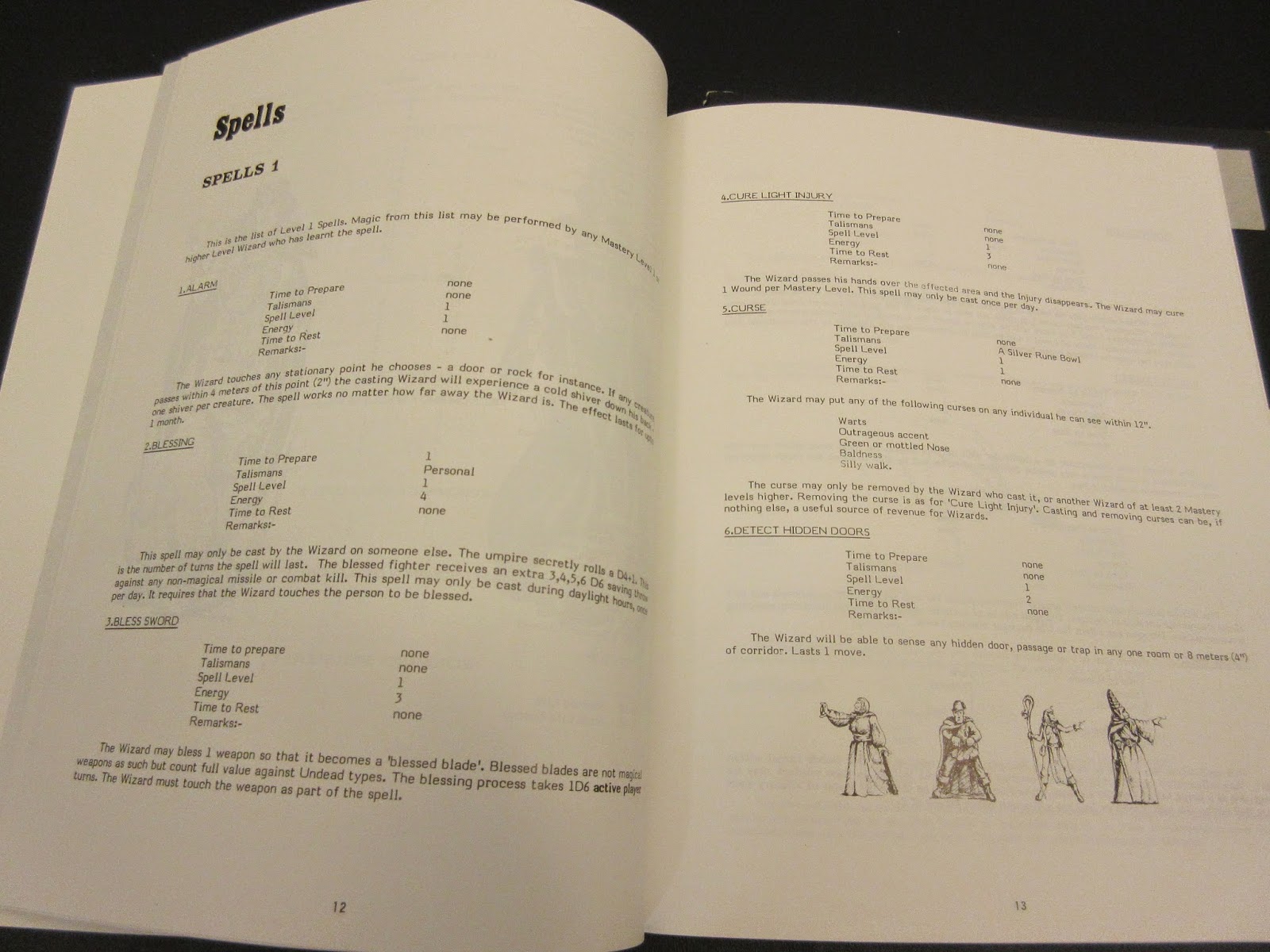 Those spells sure look a lot like D&D, dont it? 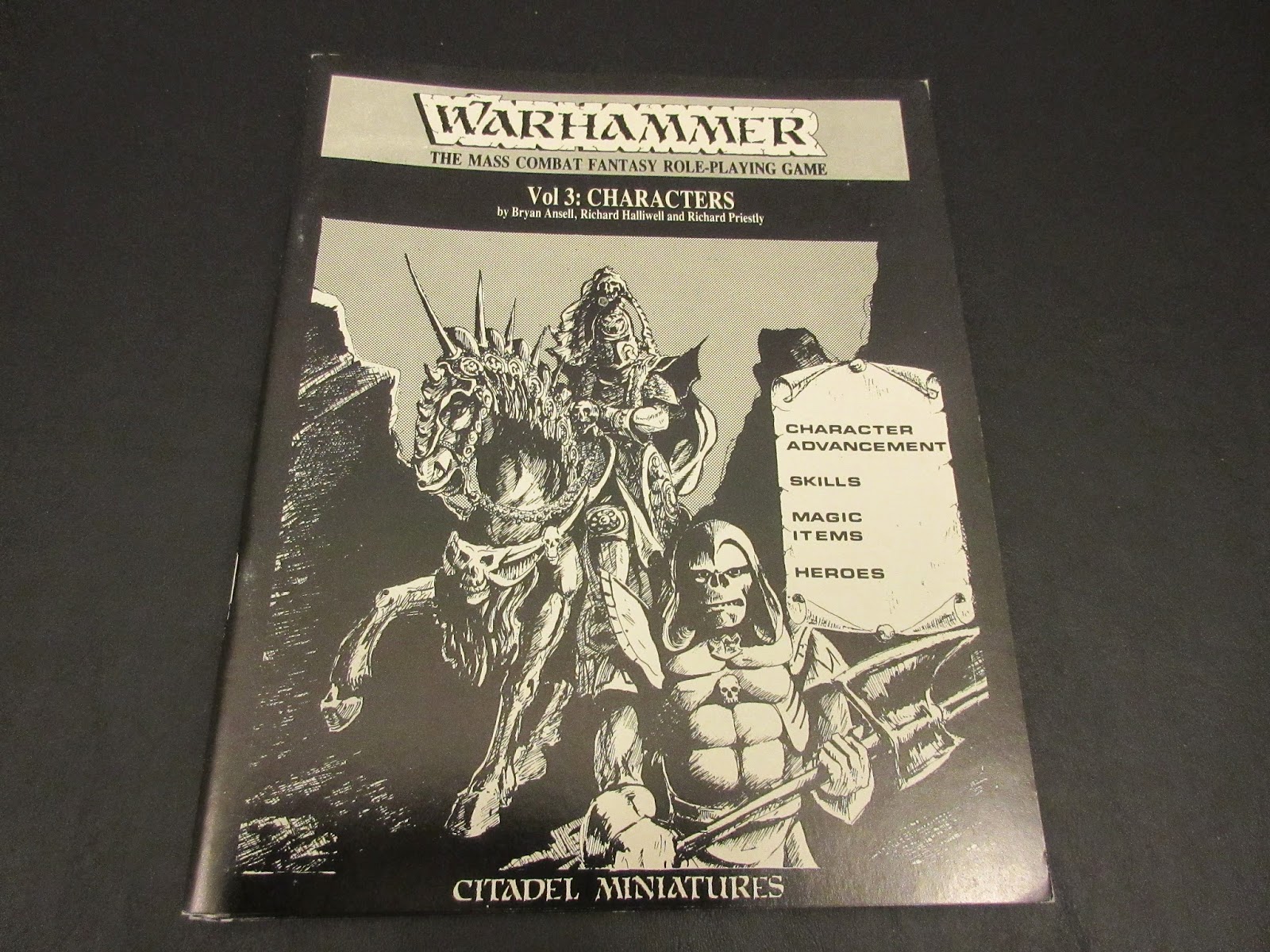 Booklet 3 is for characters 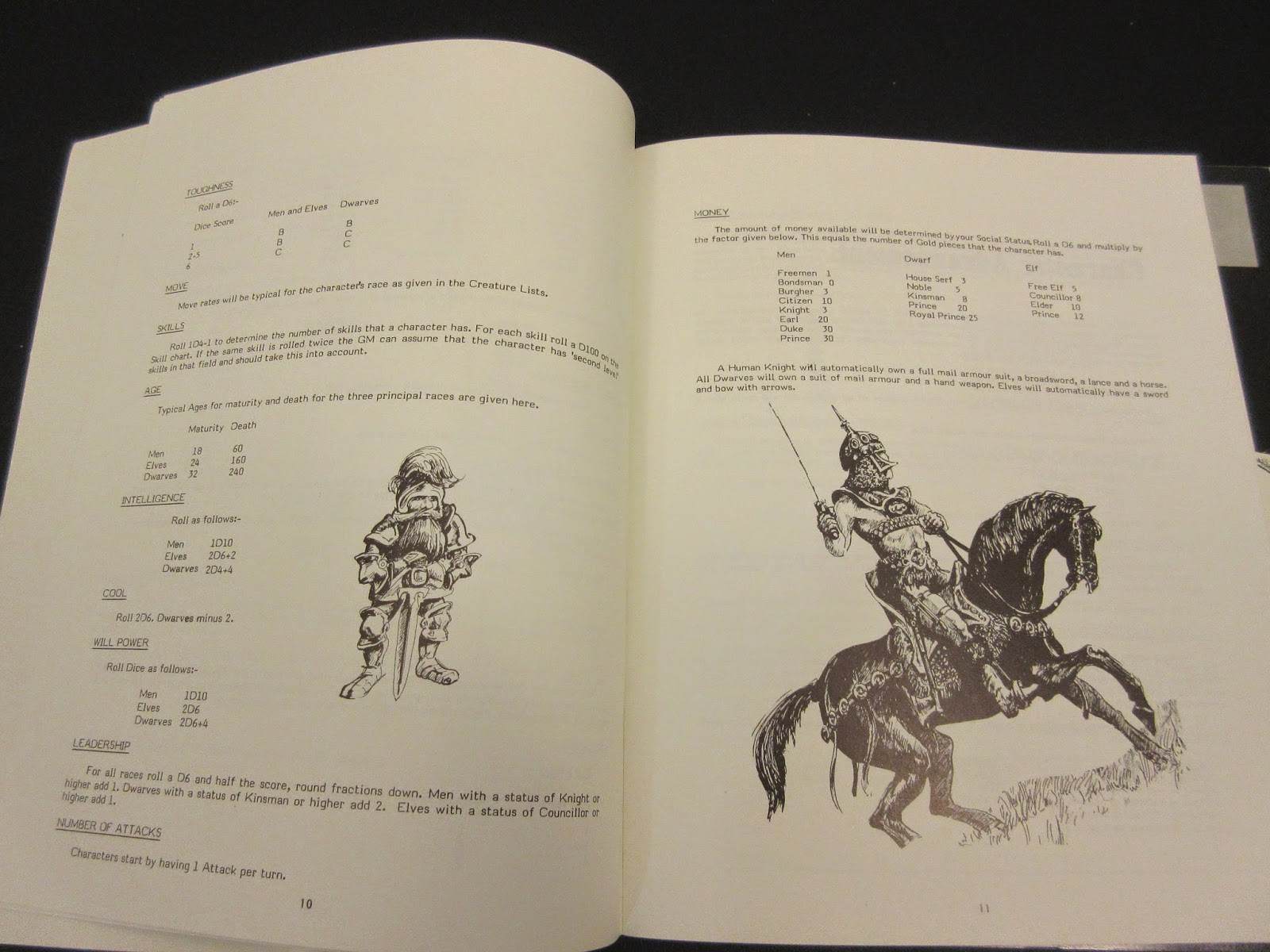 Wierd to see how close rpgs and miniature wargaming was back then.  And will be again, for me! 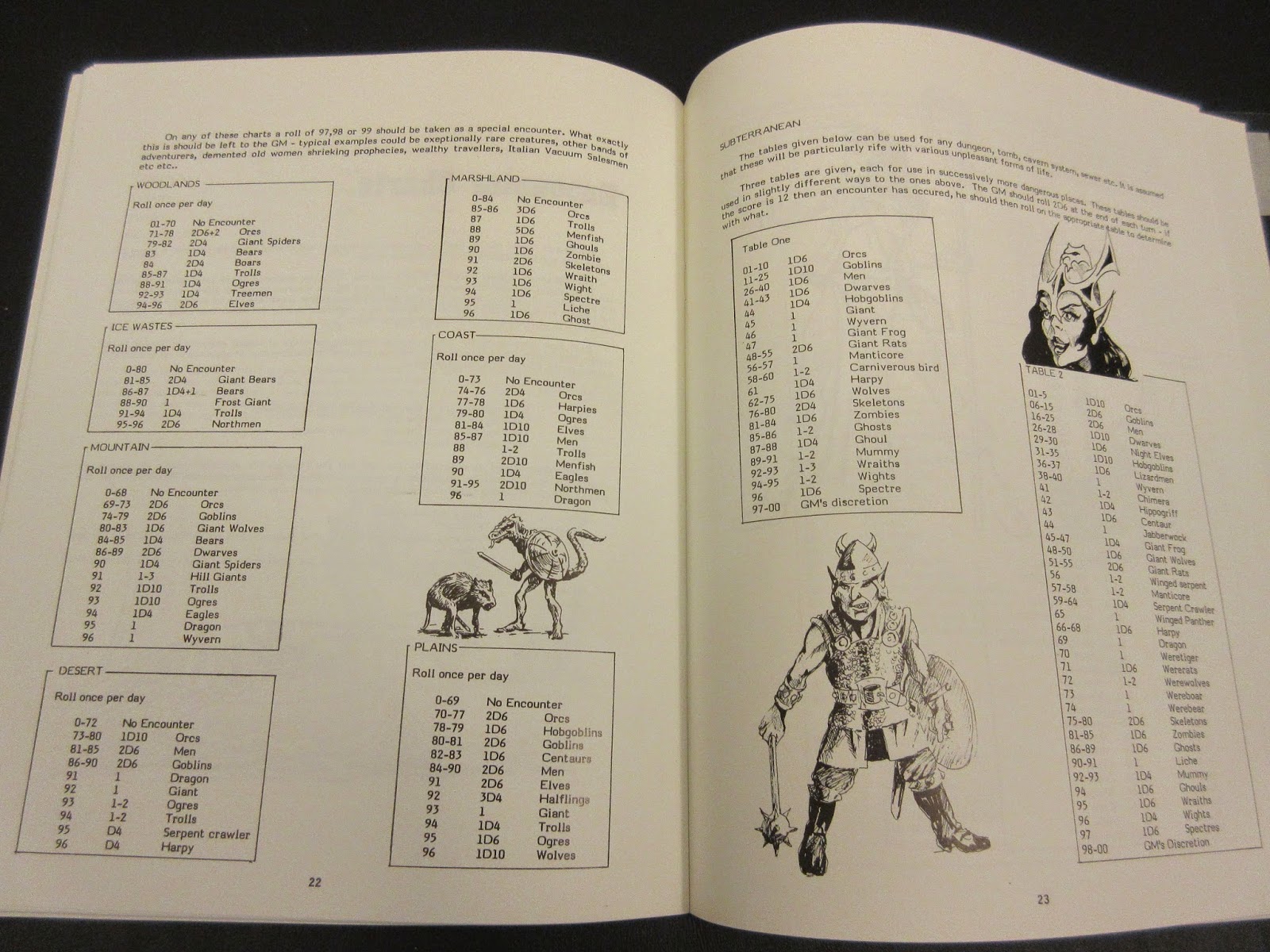 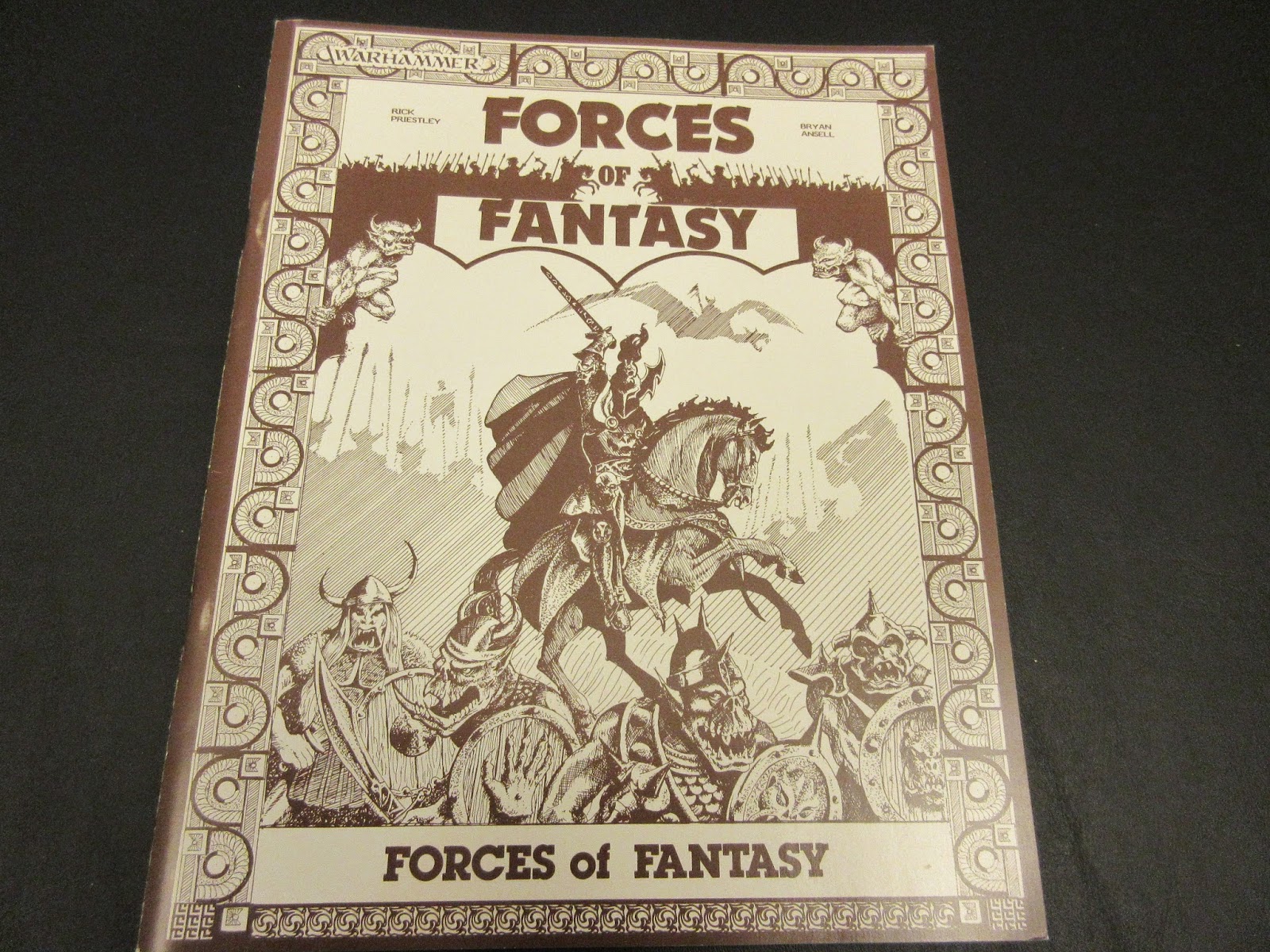 Booklet 1 of Forces of Fantasy expansion 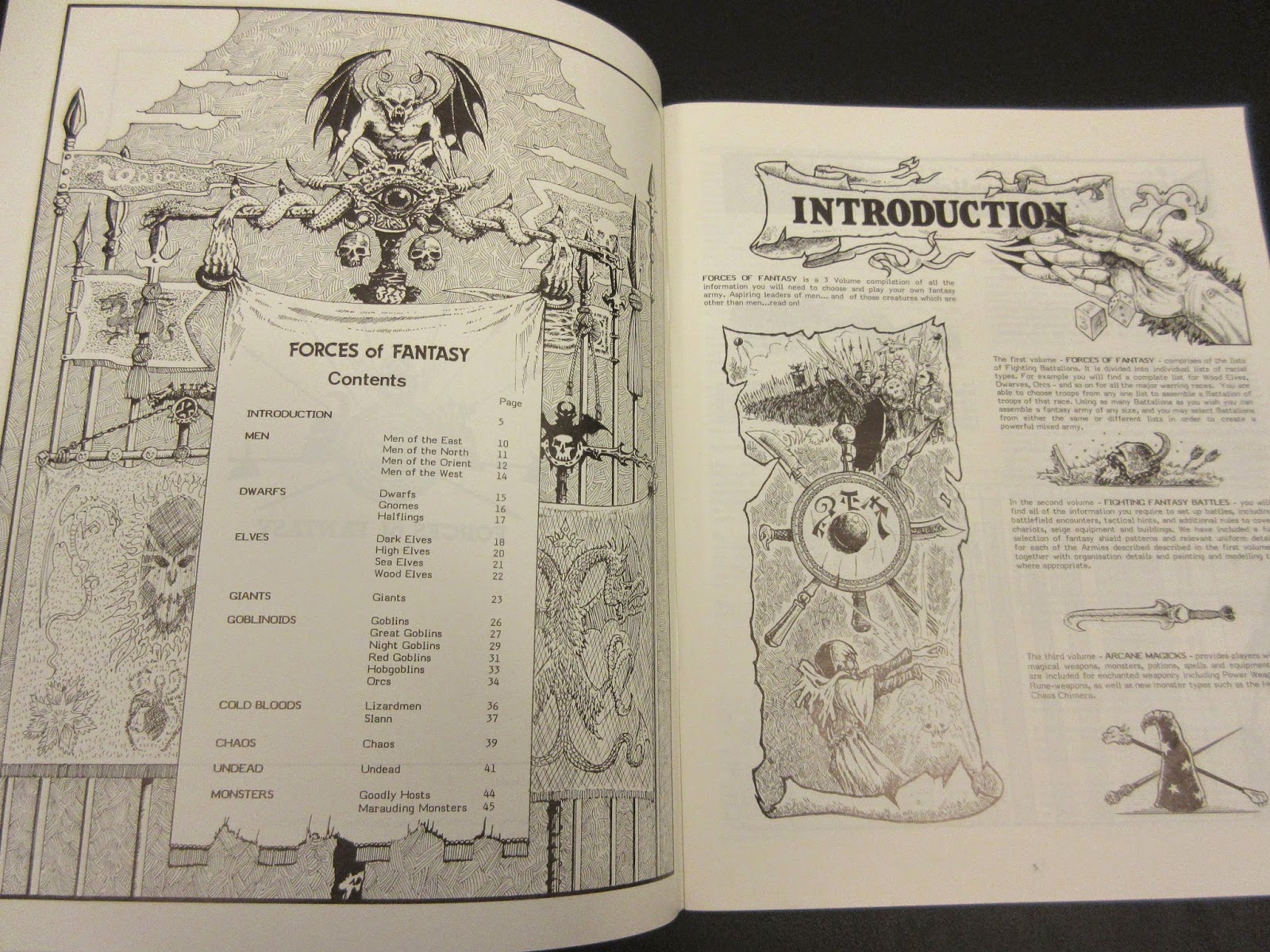 And its all about army lists, very open and simple army construction 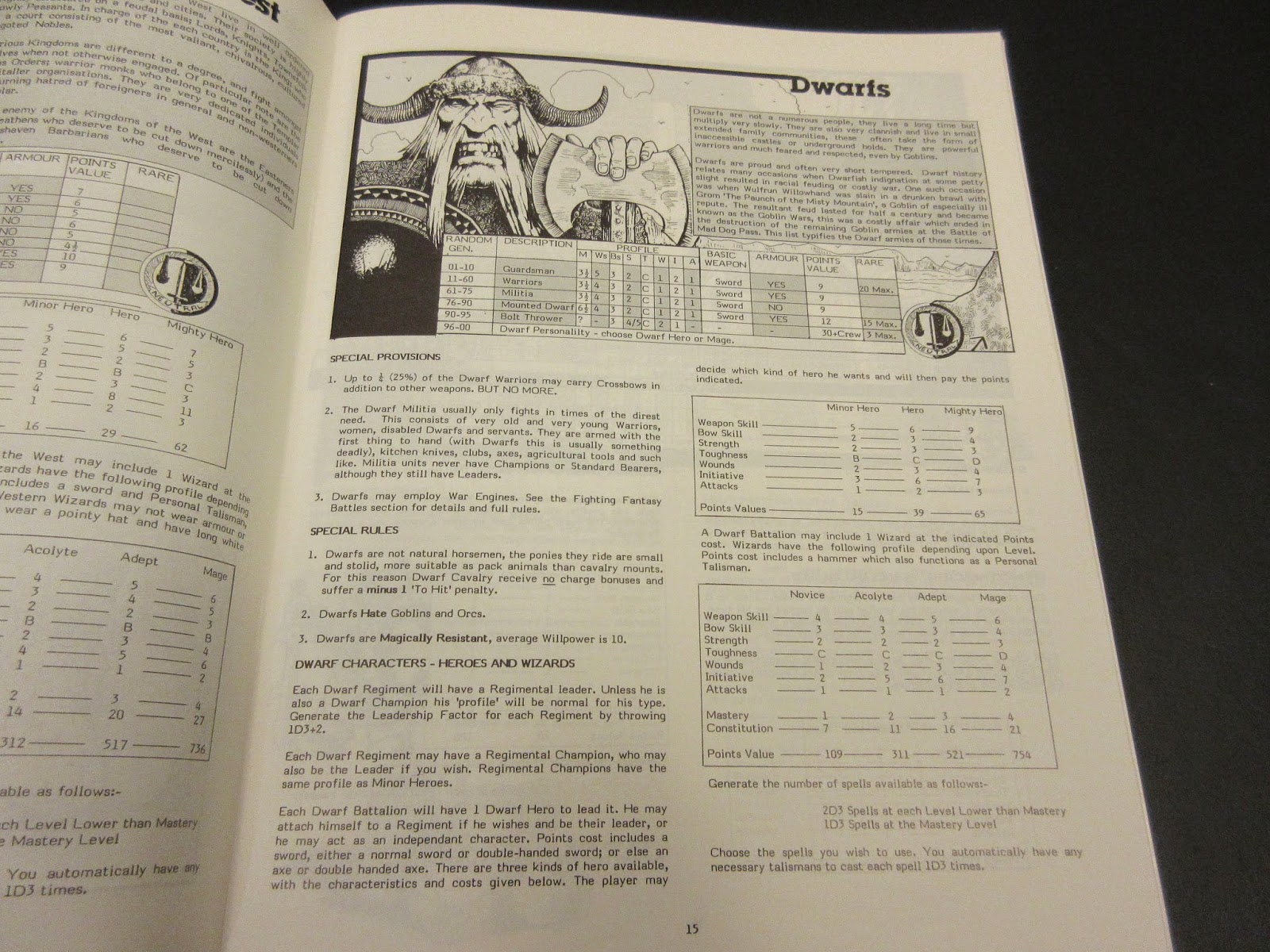 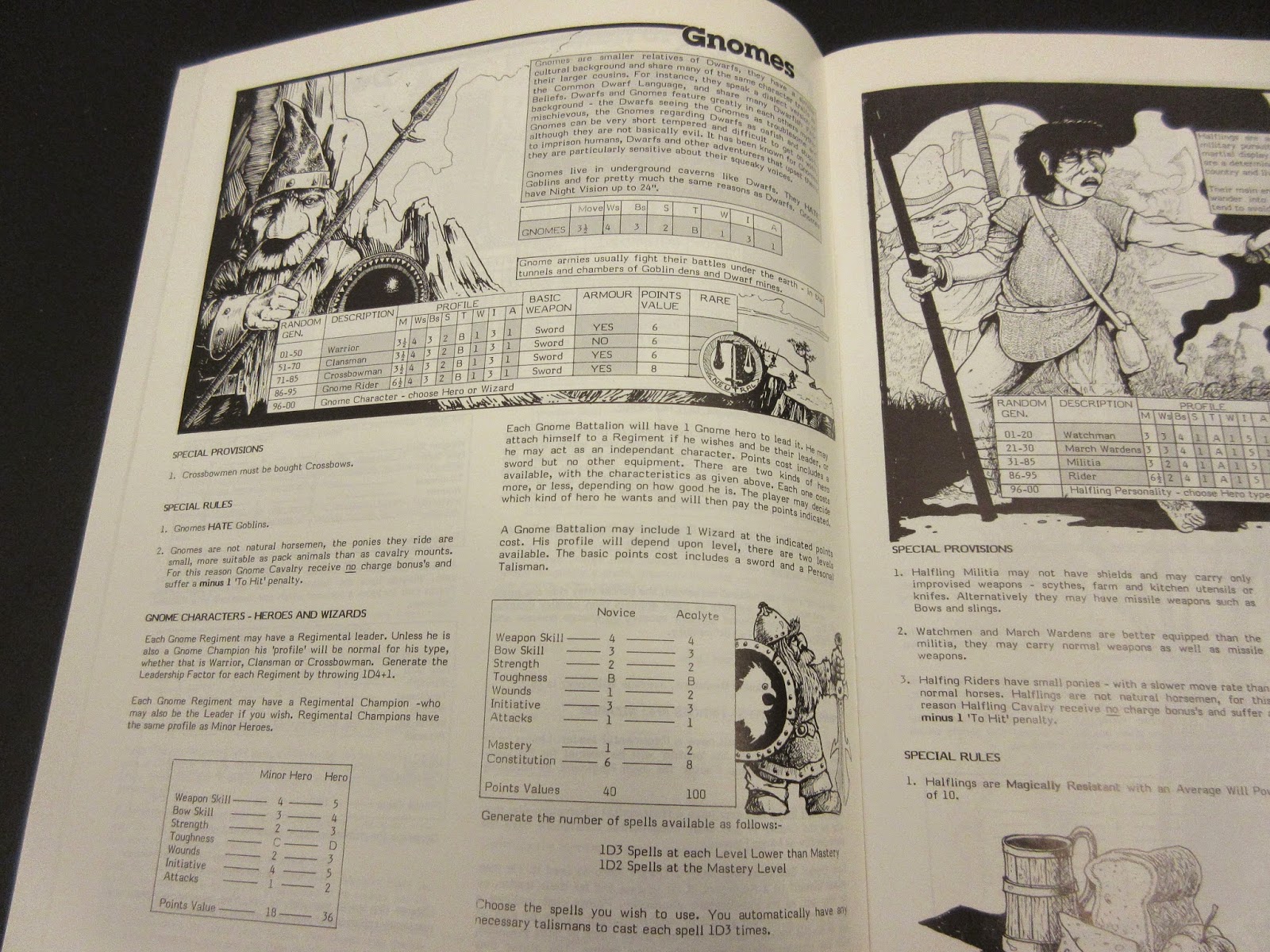 And for my gnomes, too! 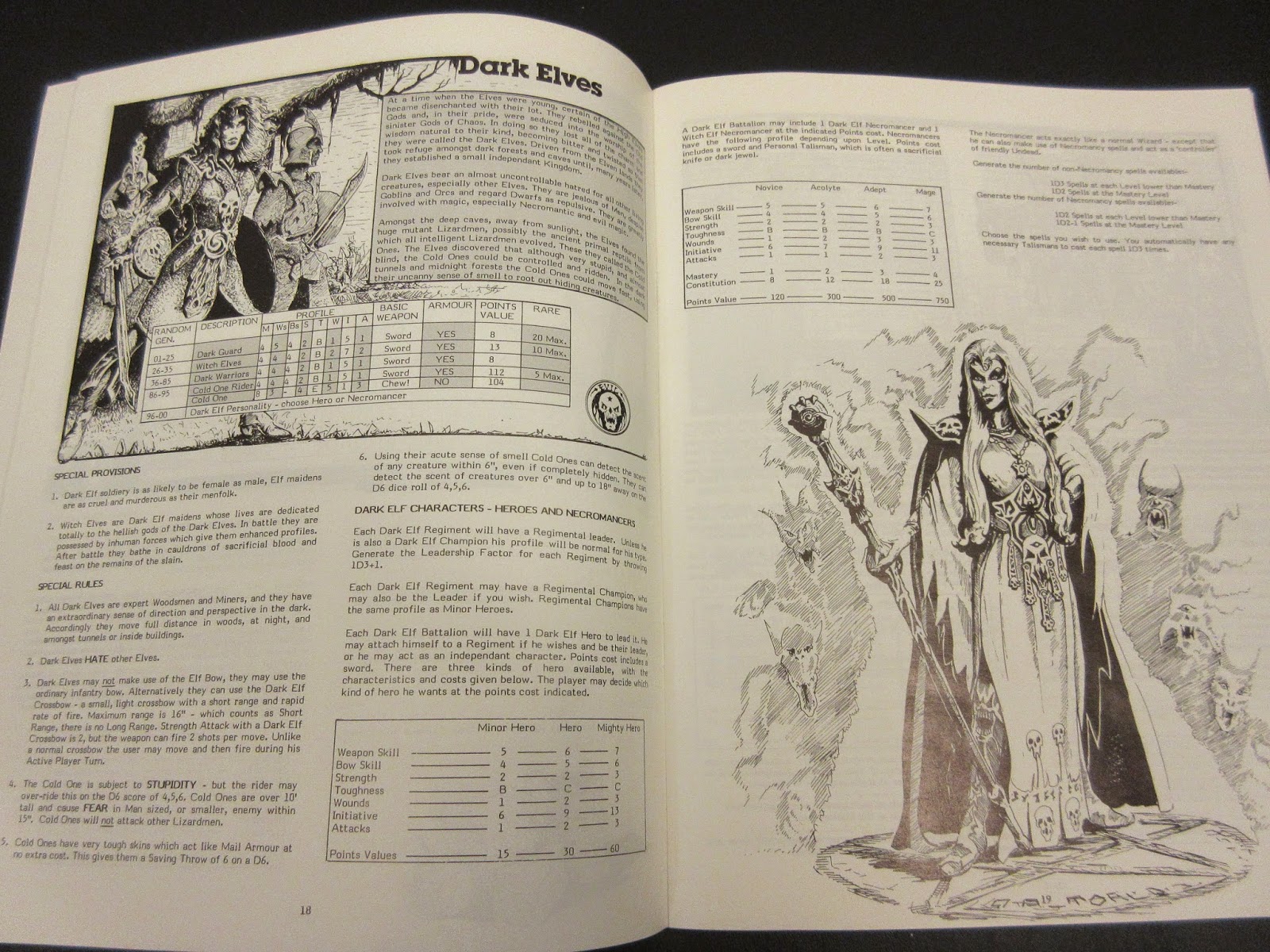 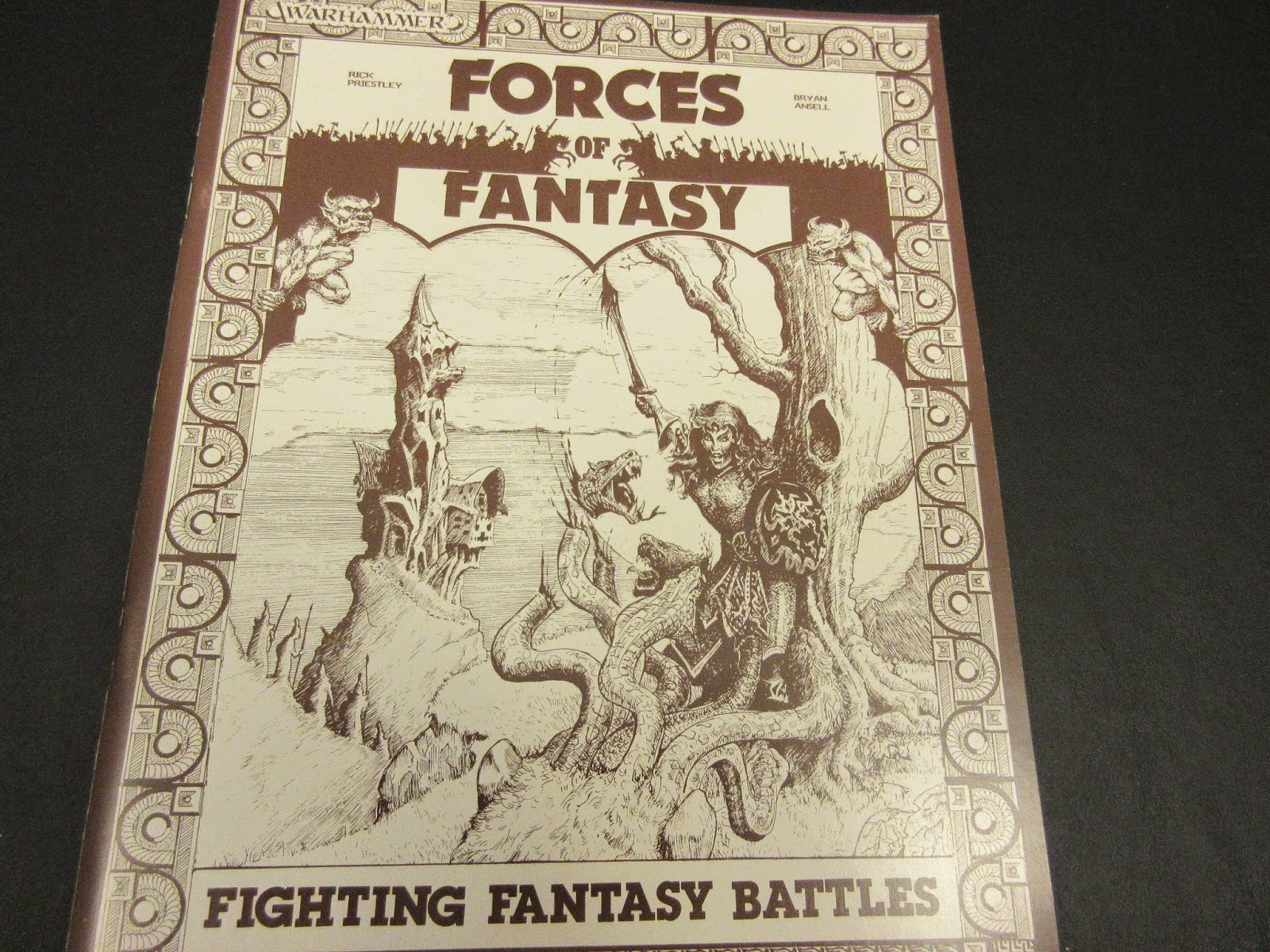 Next booklet is for advanced rules 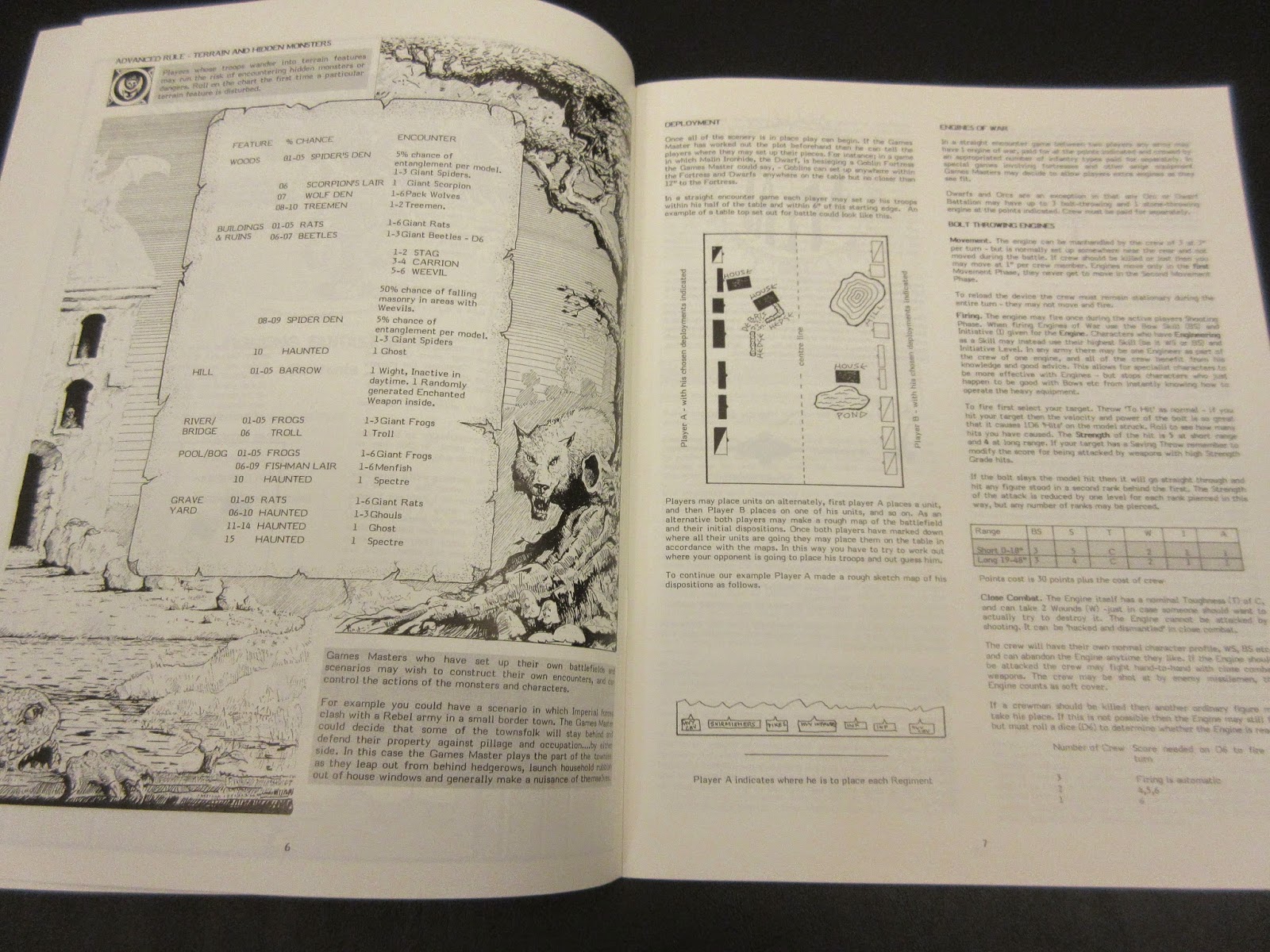 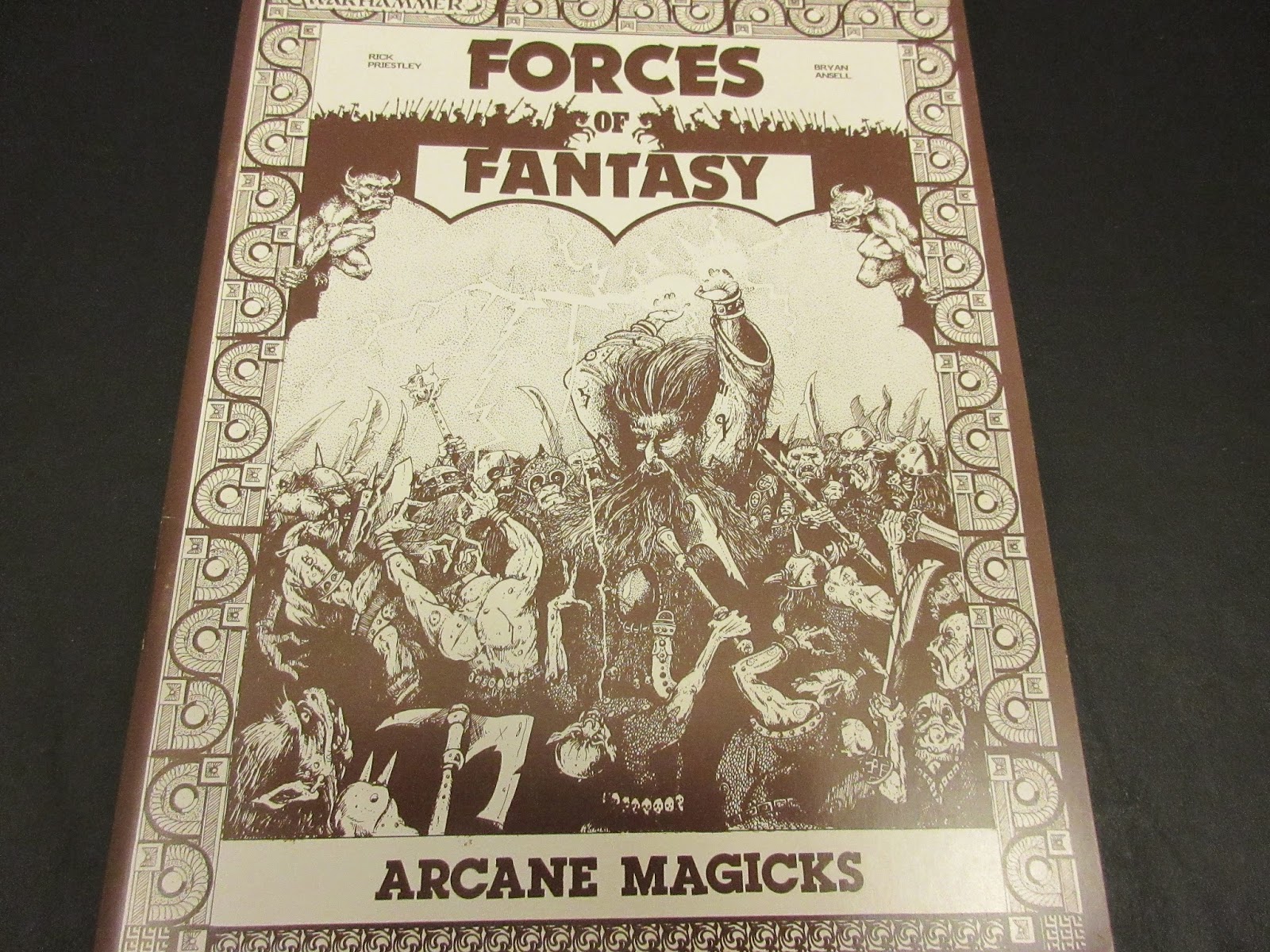 Booklet 3 of the Forces of Fantasy expansion is magical spells, weapons, treasure 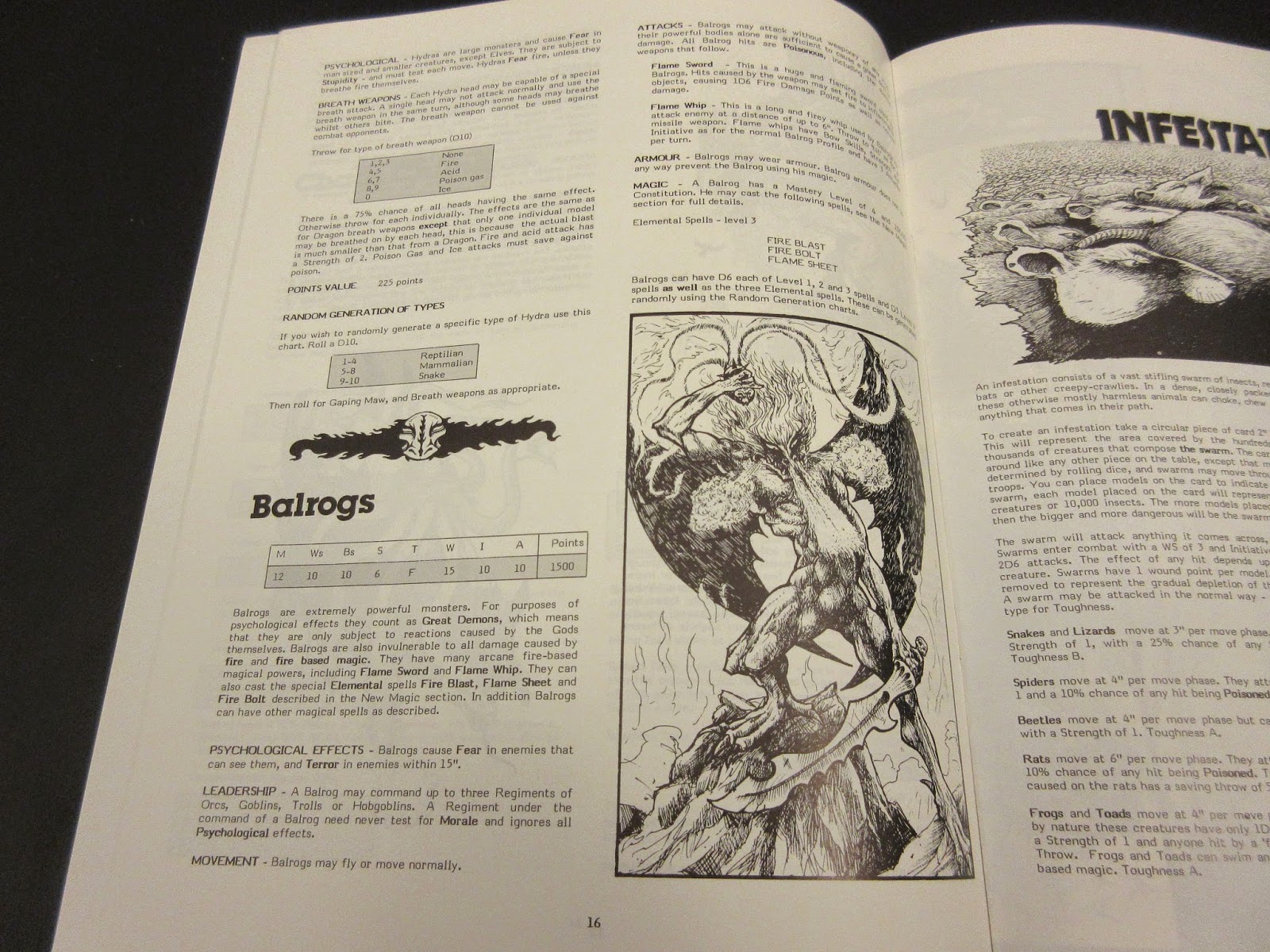 And monsters!  Here is the dreaded Balrog. 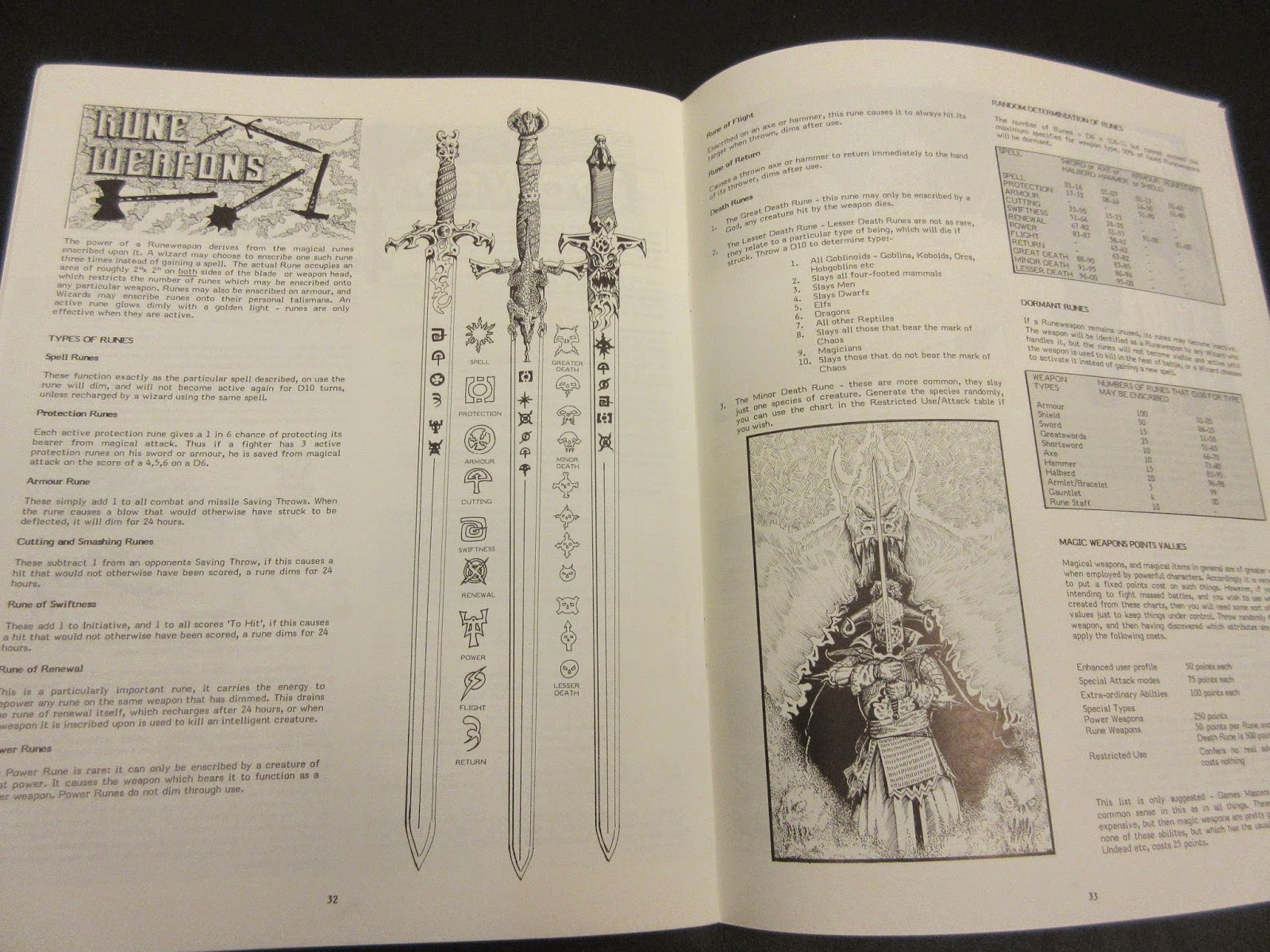 Rune weapons, and a guide to actually paint them on your  minis. Ooh, lookout, Death Runes! 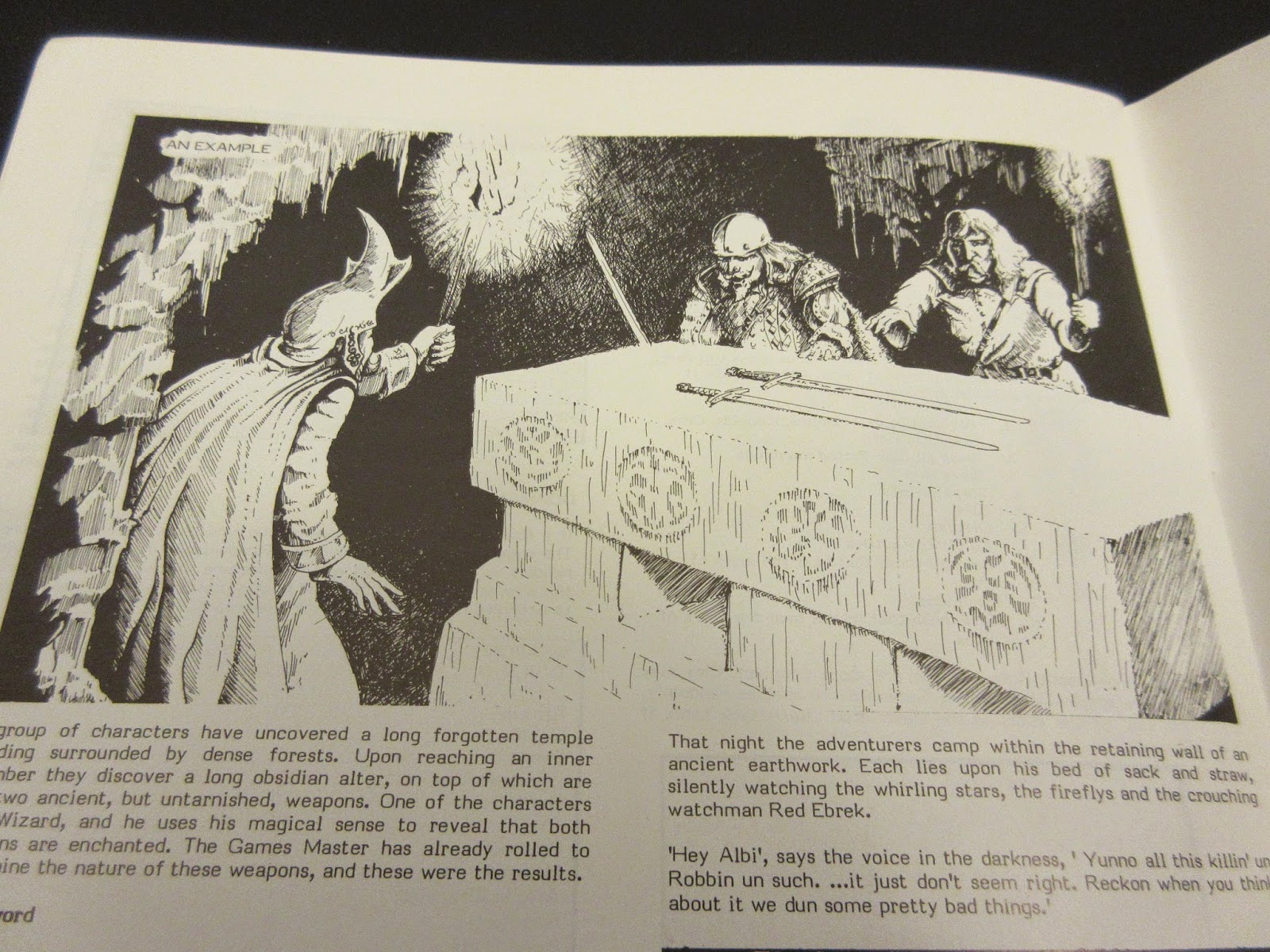 Another nice illustration, every bit as evocative as the old school AD&D portfolio 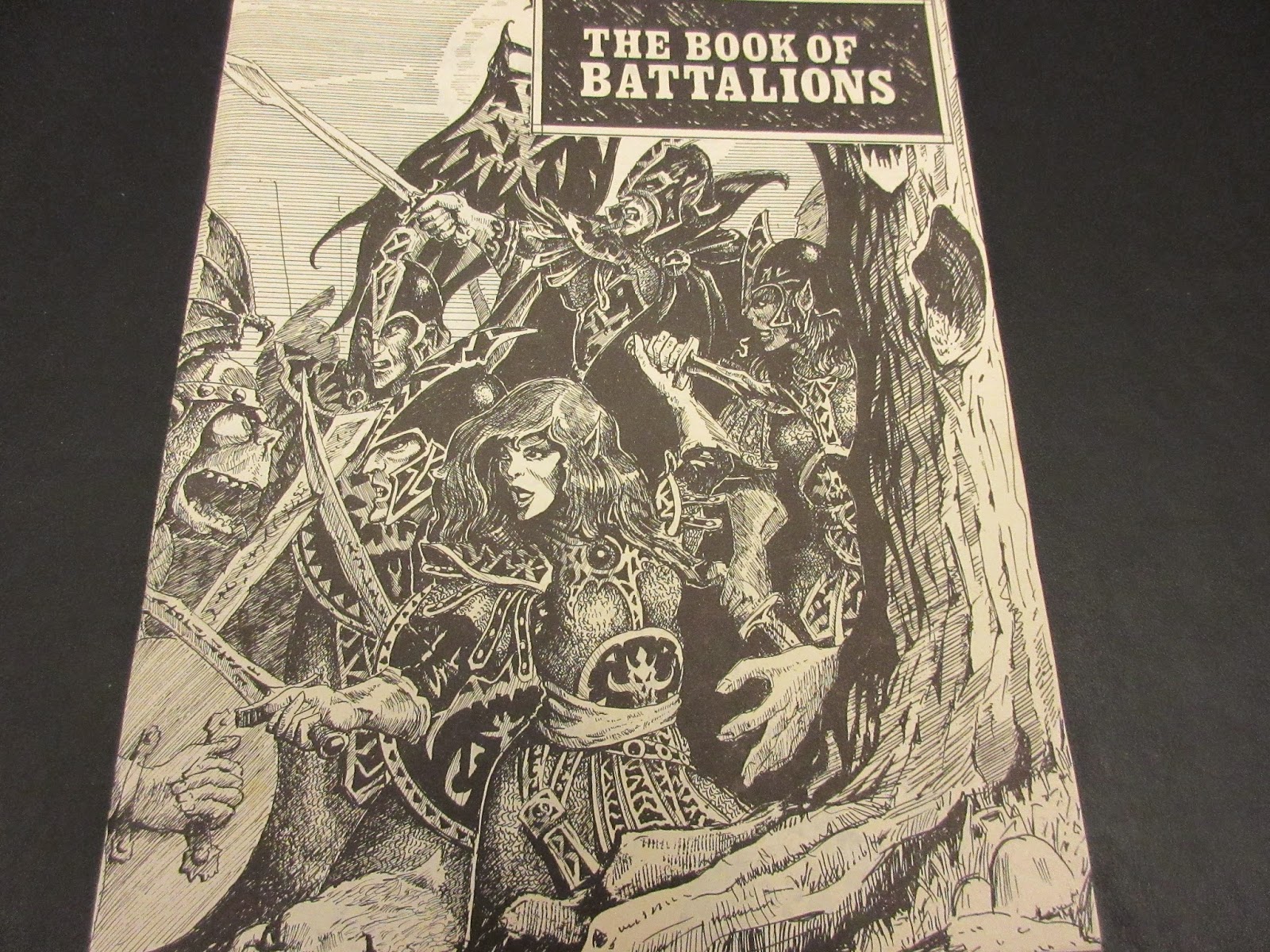 Finally, the Book of Battalions, which has famous game industry people with their army lists. 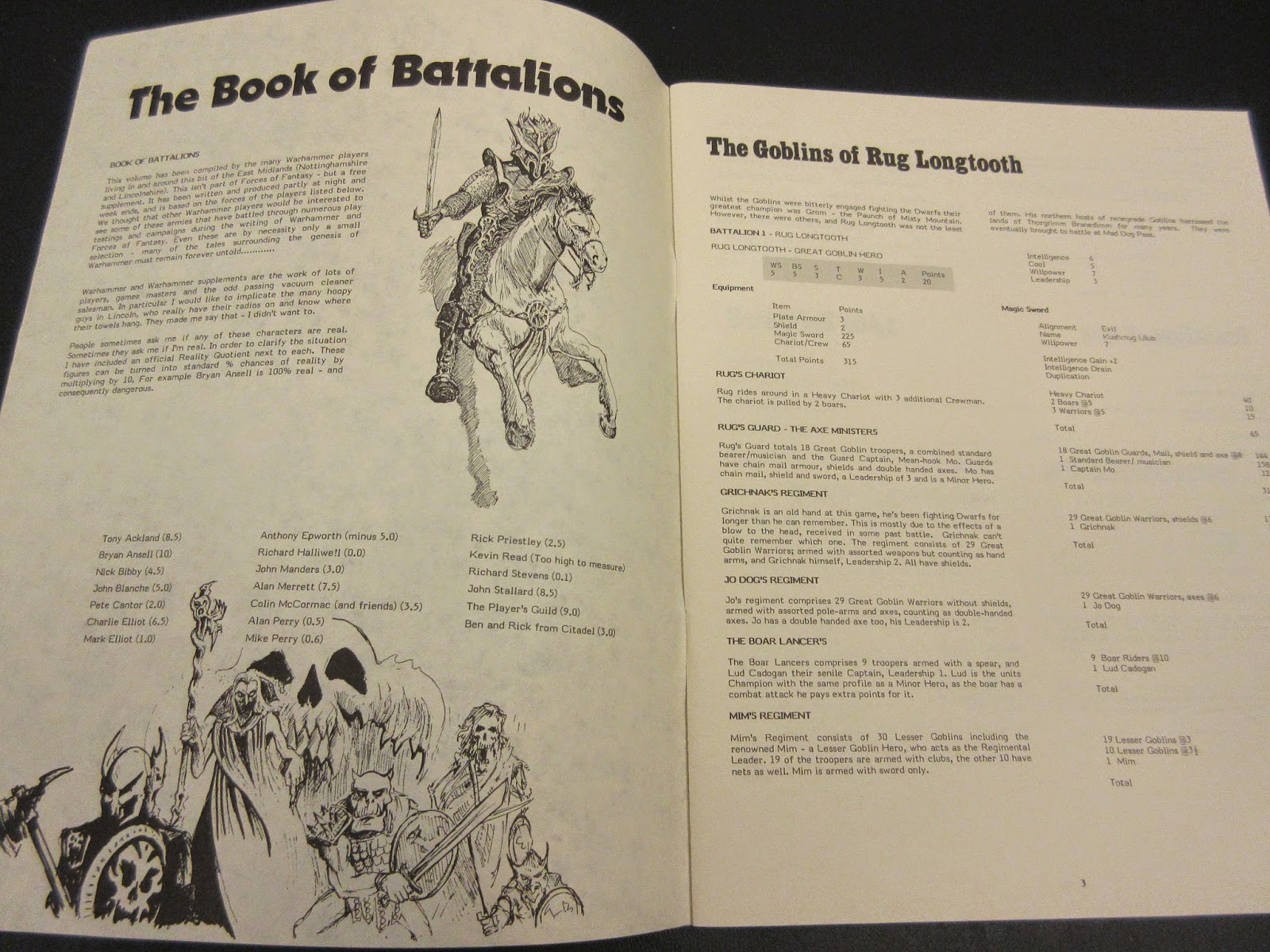 I like the Reality Quotient stat for each army... "For example Bryan Ansell is 100% real - and consequently dangerous."  and yet poor Mr Rick Priestly is a meager 25%,  John Blanche 50% The Perry twins make 11% combined! Mr John Stallard (current head honcho of Warlord Games) is at a respectable 85%.  Richard Halliwell (of Space Hulk fame, for me) is 0%?  Cmon, that man is a legend!

About The Moria Reclamation Project

Welcome to a history of certain doom and most probable woe!
The Moria Reclamation Project is a narrative wargame campaign set in a wacky Monty Python-esque version of the Mines Of Moria. Its a mishmash of Warhammer, Dungeons & Dragons, and the Lord of the Rings.
Dwarves of many fictions have come to retake their lost ancestral kingdom against Orcs, Dark Elves, the Undead, and various other fiends & foes.